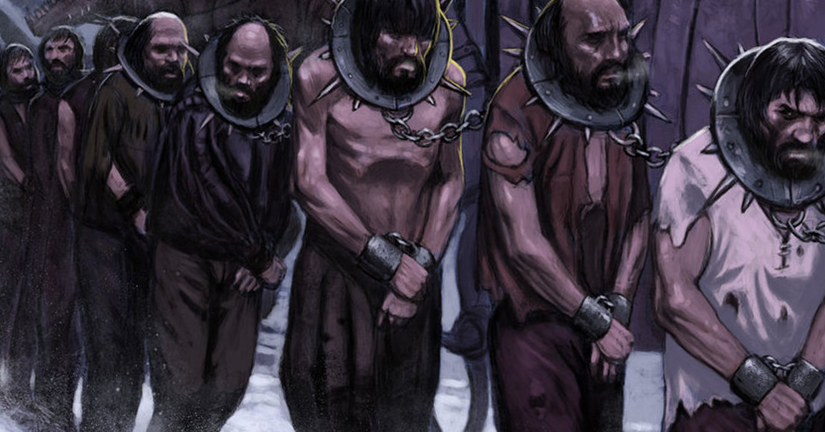 Throughout the Aigéan Thorthúil, the legality of slavery varies from one jurisdiction to another. Most of the major powers allow some form of indentured servitude, with only New Abria strictly outlawing any form of unfree labor. However, none of the major powers legalize true chattel slavery.

However, that does not mean that chattel slavery does not exist. In some small, far-flung communities that can get away with hiding it from the law (or at least, think they can) or in other places that outright flaunt the law such as pirate enclaves, true slavery might be practiced with impunity. Often, these places are newly established settlements where the hard work of building a colony needs to be done, but the money for laborers’ wages does not yet exist. Others are places where working conditions are dangerous or unpleasant, such as in mines or on plantations. And even though slavery is illegal in all the major nations, that does not mean it doesn’t happen in places where the eyes of authority can be eluded or bribed.

And where there are markets for slaves, there are slavers. Widely reviled, even by otherwise murderous and thieving pirates, slavers typically ply their trade in secret, smuggling their cargo to secret markets. Few slavers are brazen enough to operate openly, although in the past half decade it has been noted that an organized consortium of slavers has been encountered with increasing frequency. Made up primarily of orcs, with ships bearing blue-white striped sails emblazoned with an image of a manacled person. Little is known about this group, including their name, masters, and homeland. 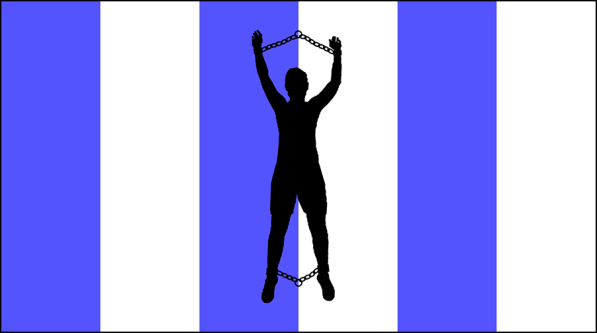 Here is a summary of the major powers and their official stance on slavery:

In Magna Patria, slaves are effectively the lowest social caste, one step below free citizen. The rights of slaves are strictly limited. They may not own property and are subjected to harsher laws. Slaves are often exploited for physical labor and menial tasks, but many are educated and used for skilled but undesirable tasks.

However, slaves do have some rights. Ill treatment of a slave by a master is harshly punished, and slaves are permitted to file complaints against their masters with the constabulary. Slaves are also payed a small wage and permitted to buy their own freedom, in doing so becoming citizens.

Holy Brond somewhat paradoxically outlaws slavery in their Code of Canon Law, and yet practices what they call “divine thralldom”, a form of indentured servitude.

In lieu of taxation, citizens are expected to pay a tithe to the church each year, except that this tithe is a fixed amount for everyone. As such, it is easily afforded by the rich but a hardship for many in the lower classes, while the poorest cannot afford the tithe at all. Anyone who is not able to pay the full tithe is relegated to the status of “helot”, a form of serfdom. Helots undergo a period of divine thralldom commensurate with the amount of the tithe still owed, during which they perform service for the church.

Novice mages in the Circle of Kesten often hone their abilities by entering into a “soul pact” with a more skilled thaumaturge. This is effectively a master and apprentice relationship, except that the apprentice is wholly subservient to the master, and total obedience is expected. The soul pact is both arcanely and legally binding. Apprentices who wish to renounce a soul pact with a master (such as when the master is abusive, or has failed to advance the apprentice’s learning) and do so by running away are considered fugitives from the law and are subject to arrest. However, given the magical bonds involved in the soul pact, it is usually the master who apprehends them first.

Interestingly, while novice mages may voluntarily enter into soul pacts, those without any arcane skill are protected by law from any form of indentured servitude.

A person can agree to become a company’s vassal for a set period, and receive compensation either as a lump sum up front (often the case when the person badly needs to repay a debt) or at the end of the period, or as periodic emoluments. The total compensation varies but is typically around twice what the same person would receive from traditional employment. In exchange, the company has greater control over many aspects of the vassal’s life, including details such as where they live, having the option to force the vassal to move to a different town if the company needs more workers elsewhere. The company also has the option to sell the vassal’s contract to another company. Both the vassal and the company have the option to terminate the contract early, but with penalties laid out in the contract that often heavily favor the company.

Strictly speaking, there is no slavery or indentured servitude in Arnum, but some would consider the military conscription requirements placed on citizens to be a form of slavery. All citizens are expected to complete a period of military service upon reaching the age of adulthood. Citizens may, with some difficulty, be granted an “indefinite leave” from this required service, but in doing so they enter a state of citizenship below that of “full citizen” and forego some of the privileges afforded to to full citizens.

Additionally, should a state of war ever be declared, there are systems in place that would effectively conscript the entire nation. Even civilian institutions like hospitals, schools, and churches would be subjected to military hierarchy and command.

New Abria is the only major power in the region that completely outlaws slavery in any degree. It is considered a major offense, and perpetrators who are caught within Abrian borders face stiff punishment on par with that for murder or rape.

Considering itself a subject of Magna Patria, Diveon models its code of laws on the empire in most regards, including in the legalities and regulations regarding slavery. Like in Magna Patria, slaves are the lowest social caste in Diveon. However, the boundaries between social castes in Diveon are blurred, and social mobility is relatively higher than it is in Magna Patria. It’s very possible for a runaway slave from one part of the island to start a new life as a free citizen in another part of the island without being caught.

However, having recently been a new colony and needing a large labor force to operate the many precious metal and gem mines dotting the harsh eastern coast, there is a shortage of paid workers available for menial labor. As such, officials in Diveon are more likely to turn a blind eye to true slaves being utilized. Officially the government comes down hard on slave owners when they find them, but unofficially Diveon is one of the largest markets of slaves.

The status of slavery and indentured servitude in Vesh varies from one city-state to the next, but generally speaking is frowned upon or tightly regulated.

However, one thing Vesh is particularly known for is “crimping”, the practice of kidnapping people by force, deception, intimidation, or other means and forcing them into service as sailors. Skilled and experienced sailors are in high demand, and unscrupulous individuals can make money by crimping sailors and delivering them to similarly unscrupulous captains. Often, crimping is done in bars when sailors on leave spend their coin on strong drink and become drunk. If that’s not sufficient, a drink might be drugged, or else the victim might be kidnapped in a dark alley at swordpoint. The victim is sometimes transported in secret to the accomplice ships via underground tunnels not unlike smugglers’ passages, called crimpers’ tunnels. Crimping occurs in many major ports in most nations, but is particularly prevalent in some Vesh city-states.