The Fisher Price My First Taupe Clipper is the first vessel owned and operated by the crew. It has been used thus far primarily for exploration and trading. 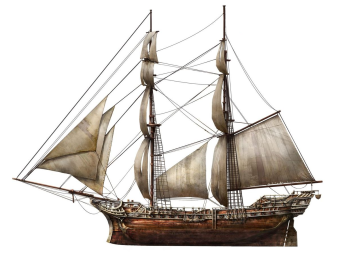 (sunk) The first vessel the crew sailed on as a group, under a contract with the Aigéan Trading Co. On the return voyage from Diveon, she was attacked and sunk by the Black Corsair.

The Black Corsair is a pirate vessel that hunts the seas of Aigéan Thorthúil. It is seen primarily (only?) at night. Some captains insist that the Corsair has specific hunting grounds that it prefers not to stray far from, but these locations are disparate and spread throughout the region.

The vessel is inky black from the tip of the topgallant to the keel, and runs no lights at night. The hull appears to be some type of warship, likely a frigate or similar, but there are few accounts available from those who have gotten close enough to see her lines and yet lived. Similarly, it is not completely clear what exactly her armaments are, but those unlucky enough to come under fire report at least six cannon, and possibly as many as twice that.

The captain of the Corsair is unknown, but popular legend among sailors suggests it may be the ghost of a famous pirate from centuries ago, Bill Bawney. And for that matter, it’s not known for certain that the proper name is “the Black Corsair“, as she bears no markings or nameplate.